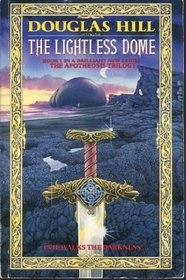 In a dark swamp far from civilization of any kind, an evil sorcerer plan to destroy the world summoning some incalculably evil and immeasurably old things which lives beyond the star and eats human souls. Meanwhile in a 20th century film studio, Red Cordell takes another cheap part in another cheap movie. As a stuntman he has to stunt, fight with weapons, and die. Because he is not the hero. An interesting but neglected sword bought in a shop is his only satisfaction. When enchantress Aurilia, being abducted by some villains, try to invoke the mighty sword of Corodel for protecting her, Red finds himself at her side, fighting for both their lives in a land of waking dreams...

A very classic Fantasy novel. No style in particular, not so good in the description nor the suspense. In fact it is all about a part of description, a part of action, then the character thoughts, then the conclusion part. And this following happen twice by chapter. But, I have to admit it works ! In fact you cannot stop reading until you have finish a chapter. And that is great too. You can make some stops in your reading without being frustrated. It made this first book of three a very good one for holidays. Douglas Hill serves us a good story about a man which is bring to a brand new world where he has to save a princess. I have told you that is not a wonderfully new story in the Fantasy world but it is quite efficient. It is a good rest between another big book of fantasy in ten volumes or more. Amazing by its simplicity, astonishing by his success over you. Definitively a good one.